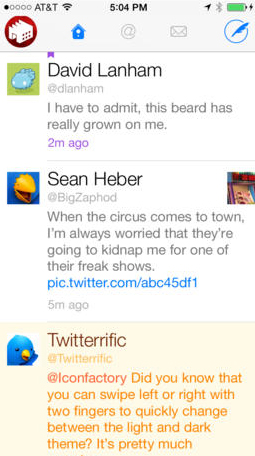 First up, in version 5.7.1, double-tapping in the photo viewer now properly zooms in on an image.

The formatting of links from Twitterrific via email has also been improved. Older Twitter status links now also open directly in the app.

Finally, developer The Iconfactory has removed the queuing of tweets to prevent accidental duplicate posts.

A universal app designed for the iPhone/iPod touch and iPad/iPad mini, Twitterrific 5 can be downloaded now on the App Store for free.

Thats definitely a new revenue model for the app. Starting with version 5.7, which arrived in late March, the app changed to a freemium structure. While the app itself is free to download, in-app purchases allow users to do things like remove ads and add push notifications.

The iOS 7 friendly design arrived back in September, and our own Christine Chan was very positive about the new look:

Ive been playing around with the latest update for the past few hours, and its definitely a breath of fresh air in terms of Twitter clients on iOS 7. Twitterrific has always been focusing on actually reading your timeline, and this update hones that experience.