Two unexpecting families are brought together when a forbidden romance blossoms between Walter Kolber, a handsome violinist, and Chao Chen, a gifted pianist, during World War II…Thrown Upon the World: A True Story by George Kolber

Thrown Upon the World: A True Story 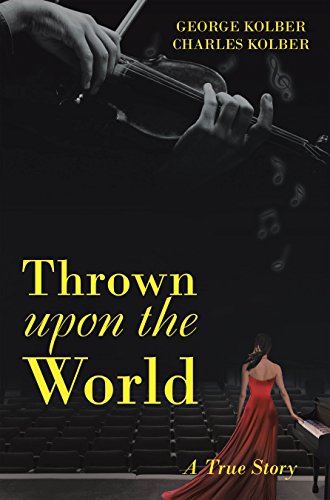 It is 1938 when the Kolbers, affluent Viennese Jews, flee their country for Shanghai after its annexation by the Nazis. Eva and her daughter take the Trans-Siberian Railroad through war zones where they must confront border guards and Japanese imprisonment. Meanwhile, her husband, Josef, and their twin sons travel by ocean liner, hiding valuables in crates.

Similarly in China, the politically powerful Gan Chen family finds their lives upended by Japanese invaders. Forced to abandon their estate, the family seeks refuge in Shanghai. While the families adapt to their new lifestyles during the war, their children meet. Walter Kolber is a handsome violinist; Chao Chen is a gifted pianist.

After a forbidden romance blossoms, Chao Chen discovers she is pregnant. Without familial blessings, the lovers marry in December 1946 and head with their newborn to a refugee camp in Austria. As Chao Chen grapples with language and cultural barriers, the family is met with turmoil and tragedy. Now only time will tell if they will survive their troubles to start a new life in the United States.

A remarkable true story, Thrown upon the World tells the tale of two families brought together during World War II in Shanghai and the twist of fate that split them apart.

“The book is about surviving, lover, betrayal, and rebirth. It tells a history that is not often written about, but it reads like a novel. Great book, I couldn’t put it down.”

The post <p style="text-align:center;font-weight:bold;">Two unexpecting families are brought together when a forbidden romance blossoms between Walter Kolber, a handsome violinist, and Chao Chen, a gifted pianist, during World War II…<br /><em>Thrown Upon the World: A True Story</em> by George Kolber</p> appeared first on Kindle Fire on Kindle Nation Daily.