Uber today announced that passenger ratings will be displayed more prominently within its iPhone and iPad app.

Now, a rider's rating will be displayed right under their name in the app's menu that slides out from the left. Previously, riders had to visit an unadvertised Uber support document and sign into their account to view their score, likely resulting in some riders not even knowing the feature existed. 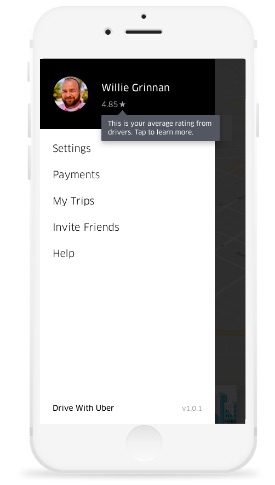 While most Uber users are likely familiar with rating drivers on a five-star scale after a trip, drivers can also rate passengers. If a rider eats in the car without permission, slams the door, or tries to pile in more people than seat belts, for example, a driver could give that passenger a low rating.

By making these rider ratings more visible, Uber hopes it will remind riders that "mutual respect is an important part" of its Community Guidelines.

Ratings are always reported as averages, and neither riders nor drivers will see the individual rating left for a particular trip.

Uber for iPhone and iPad [Direct Link] was updated earlier this week, but the rider rating change still appears to be in the process of rolling out.