With all the craziness going on in New York City right now you’d think there is nothing else happening. Well, I’m glad to say that there is more happening. Remember that countdown timer Canonical posted yesterday? Well, it wasn’t exactly for an HTC tablet (as cool as that would have been) but the company — which makes the Linux distribution Ubuntu — has some exciting news regardless.

Ubuntu for Tablets has been introduced, and it’s an implementation that has been built from the ground up with multi-tasking in mind. The biggest feature to drive that point home is SideStage. With it, you’ll be able to pull up the phone interface of an app from the right edge of your display so you can use it while doing something else. For instance, I could be Skyping with my friend on the left, and have a smaller pane offset to the right for checking Twitter.

SideStage can come in as an overlay or as an adjustable split-screen item, not unlike the implementation you’ll find on Samsung’s Galaxy Note devices or on Windows 8 Pro. What’s even cooler is that the tablet app in SideStage can automatically flipped over to the phone part, and the user interface will change accordingly (assuming there’s a phone interface for that particular app baked in).

In the video above, Canonical shows how you can converge the various aspects of your computing life with one seamless experience. Dock your phone with your tablet, and you’ll be whisked into the tablet interface while your phone apps continue running off to the side in Side Stage. From there, if you were to connect a keyboard and mouse to the tablet you can use the full Ubuntu experience as you would on traditional desktops and laptops. Then, take your remote and turn your television on for that same Ubuntu experience on the big screen. 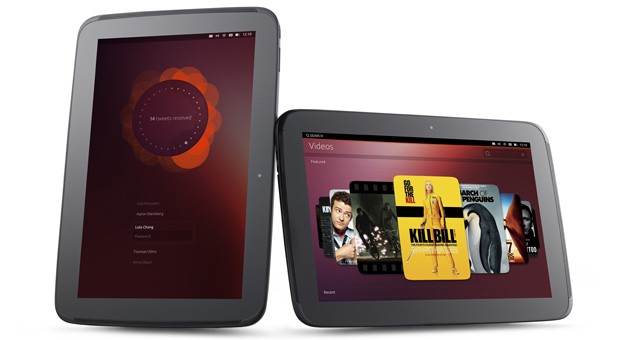 So why is this so important to Android? Well, those of you who own the Nexus 7 and Nexus 10 will be able to see how this works for yourself once Canonical brings out working preview code for those devices this Thursday. It’s a nerd’s wet-dream come true, and we can’t wait to see how this all pans out. Watch the video above, and read on for full press details.

Canonical today presented Ubuntus tablet interface — the next step towards one unified family of experiences for personal computing on phones, tablets, PCs and TVs.

”Multi-tasking productivity meets elegance and rigorous security in our tablet experience,” said Mark Shuttleworth, founder of Ubuntu and Canonical. ”Our family of interfaces now scales across all screens, so your phone can provide tablet, PC and TV experiences when you dock it. That’s unique to Ubuntu and it’s the future of personal computing.”

”Fashion industry friends say the Ubuntu phone and tablet are the most beautiful interfaces they’ve seen for touch,” said Ivo Weevers, who leads the Canonical design team. ”We’re inspired by the twin goals of style and usability, and working with developers who are motivated to create the best possible experience for friends, family and industry.”

The Ubuntu tablet interface supports screen sizes from 6 to 20 and resolutions from 100 to 450 PPI. The tablet fits perfectly between phone and PC in the Ubuntu family says Oren Horev, lead designer for the Ubuntu tablet experience. Not only do we integrate phone apps in a distinctive way, we shift from tablet to PC very smoothly in convergence devices.

On high end silicon, Ubuntu offers a full PC experience when the tablet is docked to a keyboard, with access to remote Windows applications over standard protocols from Microsoft, Citrix, VMWare and Wyse. An Ubuntu tablet is a secure thin client that can be managed with the same tools as any Ubuntu server or desktop, said Stephane Verdy, who leads enterprise desktop and thin client products at Canonical. We are delighted to support partners on touch and mobile thin clients for the enterprise market.

Even without chipset-specific optimisation, Ubuntu performs beautifully on entry level hardware. Our four-year engagement with ARM has shaped Ubuntu for mobile said Rick Spencer, VP Ubuntu Engineering at Canonical. We benefit from the huge number of contributing developers who run Ubuntu every day, many of whom are moving to touch devices as their primary development environment.

For silicon vendors, Ubuntu is compatible with any Linux-oriented Board Support Package (BSP). This means Ubuntu is easy to enable on most chipset designs that are currently running Android. Ubuntu and Android are the two platforms enabled by Linaro members.

The Touch Developer Preview of Ubuntu will be published on the 21st February 2013 with installation instructions for the Nexus 7 and Nexus 10 tablet devices as well as smartphones such as the Nexus 4 and Galaxy Nexus. Installable images and source code will be available from developer.ubuntu.com.

The Preview SDK, which currently supports phone app development, will now be updated to support tablet apps as well. Uniquely, on Ubuntu, developers can create a single application that works on the phone, tablet, PC and TV because it is the same system and all services work across all form factors.

The Canonical team will be available to install Ubuntu on your phones and tablets at Mobile World Congress. Note: Ubuntu Touch Developer Preview is a developer build and not a consumer-ready release.

About Canonical and Ubuntu

Canonical is the company behind Ubuntu and the leading provider of services for Ubuntu deployments in the enterprise. With global teams of developers, support staff and engineering centres, Canonical is uniquely positioned to help partners and customers make the most of Ubuntu. It also operates Ubuntu One, a cross-platform personal cloud service  for consumers. Canonical is a privately held company.

Ubuntu is a free, open-source platform for client, server and cloud computing. It is the most widely used Linux on the top 1000 websites by traffic, the reference platform for OpenStack deployments, the most popular guest OS on public clouds, and ships on PCs from Dell, Lenovo, HP and other brands. Since its launch in 2004, it has become the preferred choice for open desktop and scale-out computing, from Fortune 500 companies to hardware makers, content providers, software developers and consumers.