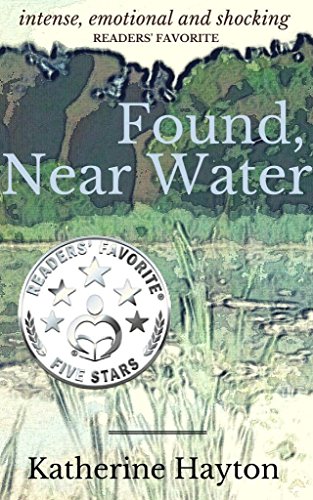 4.6 stars – 5 Reviews
Kindle Price: 99 cents
On Sale! Everyday price:
Text-to-Speech and Lending: Enabled
Don’t have a Kindle? Get yours here.
Here’s the set-up:

Rena Sutherland wakes from a coma into a mother’s nightmare. Her daughter is missing – lost for four days – but no one has noticed; no one has complained; no one has been searching.

As the victim support officer assigned to her case, Christine Emmett puts aside her own problems as she tries to guide Rena through the maelstrom of her daughter’s disappearance.

A task made harder by an ex-husband desperate for control; a paedophile on early-release in the community; and a psychic who knows more than seems possible.

And intertwined throughout, the stories of six women; six daughters lost.

The police found her body stuffed into an old recycling bin out the back of a sleep-out. My beautiful girl had been bent to fit as though she was just a piece of rubbish, something to be disposed of.

“… Found, Near Water, is dark and uplifting all at once; a taut, well-crafted thriller and a very impressive debut offering. It’s highly recommended – 5 Stars” Jack Magnus for Readers’ Favorite

“The story is dark and very emotionally gripping and Katherine Hayton brought it to life with a well crafted plot, compelling characters and skilful writing; it is sad with some really dark and twisted parts, but a compelling read and I loved it – 5 Stars” Faridah Nassozi for Readers’ Favorite

“The plot is mysterious and intriguing and will keep readers riveted. The crime angle in the story is what will blow the minds of readers with its suspense and intrigue – 5 Stars” Mamta Madhavan for Readers’ Favorite

“Katherine Hayton depicts the heartache and tragedy of trauma. She paints a very realistic backdrop for the story’s plot, you feel the emotion of their personal loss and their struggle to get through daily life. Hayton writes a volcanic conflict; it explodes without warning, leaving in its wake a field of terrifying debris and violence… the end is intense, emotional and shocking. Katherine Hayton’s first novel Found, Near Water is a mystery you will not soon forget – 4 Stars” Cheryl E. Rodriguez for Readers’ Favorite