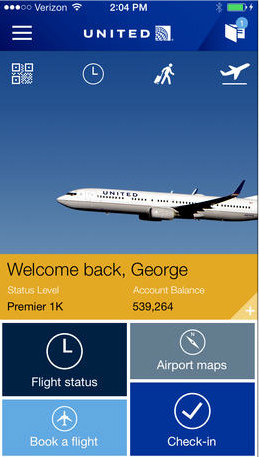 As expected, United Airlines has just updated it iOS app with an interesting new feature. Version 2.0.13 adds an in-flight entertainment system only for the iPhone and iPad.

On select United flights, users can connect to the United_Wi-Fi network and access around 150 movies and 200 TV shows for no additional cost. Users wont need to pay for in-flight Wi-Fi to watch the entertainment.

During playback, viewers can stop, pause, rewind, and skip through content. Theyll also be able to switch between shows at any time.

To see if your flight offers the personal device entertainment service, head to the Inflight Amenities or Status & Information tab on united.com. You can also check the Amenities section in the app itself within 24 hours of your departure time.

A universal app designed for the iPhone/iPod touch and iPad/iPad mini, United Airlines can be downloaded now on the App Store for free.

For other app news and reviews today, see: Angry Birds Go! Update Makes Kart Racing Even More Fun, Help Adorable Tree Critters Save Their World From Darkness In Botanicula For iPad, and TuneIn Radio Pro For iOS Gets Social With A New Update.

United Airlines Debuts An In-Flight Entertainment Service Only For iOS Devices is a story by AppAdvice.com
AppAdvice - iPhone, iPad, iPod, App Reviews + News
Get the latest tips & apps for your Smartphone