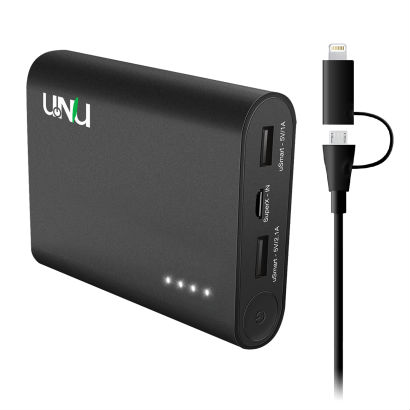 Unfortunately, one of the biggest problems that plague our smartphones is the poor battery life. While companies have expressed that they are working to increase battery life, we have yet to see any groundbreaking work in this area. We should be able to watch videos, play games, post on social media, text, and other things without having to worry about the percentage on our phones.

Until then, we have to settle on using external battery packs. The issue with these is your experience can vary, from small mAh amount, to slow charging times, and terrible hold of charge over a long period of time. Well, this battery pack looks to solve all of those.

This is the UNU Superpak Battery Pack. It is a 10,000 mAh external battery that claims to be the smallest 10,000 mAh battery in the world and to be the fastest charging battery pack ever. Does it hold up?

My experience with the UNU Superpak is a positive one, although not necessarily because of what they advertise. The battery pack is relatively small, but it’s still uncomfortable to have in my pocket. I do think it charges itself fast, but more on that later. What I enjoyed about this battery pack is that it holds a lot of charge for a long period of time that goes far in charging. Confusing, I know. Let’s break it down.

This battery pack is 10,000 mAh, which is 3-4 times larger than the battery in the average smartphone. While the mAh in an external battery doesn’t translate exactly to the amount it will charge your device, it should be close. However, this is not always the case. I’ve had experience with external battery packs that is twice as large in mAh amount than my phone, and yet only charges my phone by about 60%. With the UNU Superpak, I charged it on Sunday, and I used it every day until Friday to charge my phone from about 40% to about 80% (I have a Moto X 1st Gen, which has a 2200 mAh battery). On each of those days I also occasionally charged my phone and tablet a little bit. On Saturday, it still had 1 of it’s 4 lights in power! While this turned out to not last very long when I went to use it next, that’s still very impressive. For a work week I didn’t plug my phone in while driving (where I always use navigation and play music), and I didn’t have to worry about charging the battery pack. The other thing this means is from turning it off until turning it on again, it holds the charge it had when turned off, which is something else I have not had great experience with.

Something that is interesting about this battery pack that UNU advertises is their “uSmart” technology on the ports you plug your devices into. They claim that the port will detect what device is plugged into it, and apply the proper charging accordingly. While tablets will usually require the 2.1A port, smartphones can be plugged into either port and not be fried by the output. While this is hard to test, I can say that whenever I plugged my phone into the 2.1A port (as opposed to the 1A port), I never had any issues.

The other thing UNU advertises is that their “SuperX” technology allows the battery pack to get a charge faster than other devices. Here is what I can tell you from my experience: it does not necessarily charge fast, but compared to other devices it charges relatively faster. When I plugged in the UNU Superpak, it took a little over 9 1/2 hours to charge. In my opinion, this is by no means fast, as that’s over the 8-hour average of sleep time, meaning you’d have to think ahead to plug it in if you want it fully charged before you wake up. However, I plugged in another battery pack I’ve had for a while that’s 5000 mAh, and it took 7 hours & 45 minutes. See the difference here? A battery with half the capacity took almost as long as the UNU Superpak. Apparently this is done by the battery pack controlling its own input current through the SuperX port. Pretty neat.

To be honest, I’m not one who is big into making an accessory like this more than it is. A battery pack should hold a charge for a long time, and make that charge go a long way. However, it seems UNU is able to hold its ground pretty well.

Currently you can get this battery pack from the UNU site or Amazon for $39.99, which isn’t a bad deal considering all you get from this specialized battery pack. And UNU has offered readers of this article a coupon that is valid until the end of the month. I’ll put that info below. This can easily do in the place of an outlet if you’re going on a long road trip or camping. With a little more than 4 stars, this is a solid option.