[Update: After a long beta, the official version is out today] The Elder Scrolls: Legends card battle game comes to Android in pre-release form 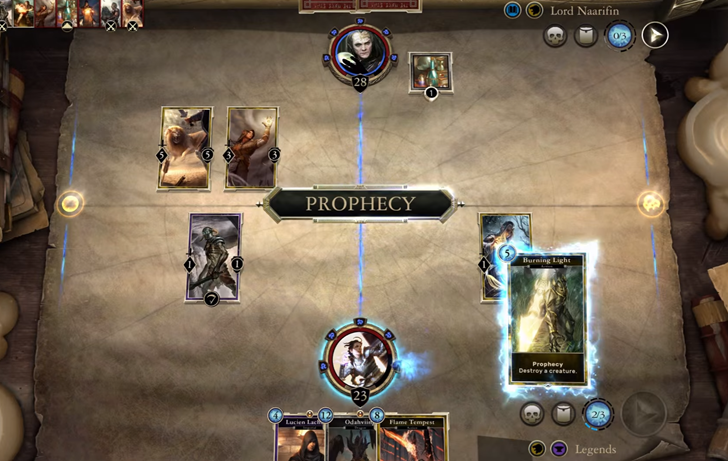 Finally, Bethesda's storied Elder Scrolls series is available on Android! Sort of. If you were hoping to romp through Skyrim or one of the older open world RPGs that PC and console players love, well, keep hoping. The Elder Scrolls: Legends is a card battle game, like Magic: The Gathering, Hearthstone, or any of the hundreds of similar titles in the Play Store. At the moment it's in pre-release (beta), but it's listed as compatible with both phones and tablets running Android 4.0 and higher.

After a massive load time, Legends opens up with a desktop-style login screen (no Google Play Games support) and a tiny-type interface - clearly there's a lot of work to be done if this game is going to be mobile-friendly. Players are encouraged to go through the story mode, set in the deep lore of the franchise, to unlock several decks before advancing to multiplayer. Unfortunately that's as far as I could get: the interface collapsed on me in my first battle, so any in-depth comparisons to competing card games will have to wait for a more stable release. Taking a peek at some of the play sessions available already, the game appears to have quite a lot in common with Hearthstone, with some interesting variances in a lane-based table setup and more complex standard mechanics. Deck-building and card leveling are big parts of the game.

The Elder Scrolls: Legends doesn't have a firm release date for Android, only a "coming soon" status from E3 this year. The beta is available (and much more playable) on the PC, and logins should sync across devices. Right now I'd recommend playing it on your computer first, especially if you plan on partaking in any in-app purchases, which go up to a hefty $70.

Apparently this version of the game was published unintentionally. We received the following message from the developers:

The Android version of The Elder Scrolls: Legends that appeared briefly on the Google Play store earlier today represented a still in development build of the tablet version of the game, on an internal test server, and was never intended to appear for download. This test version of the game is unfinished and as such, does not represent the final quality or content of the game.

We appreciate the enthusiasm for The Elder Scrolls: Legends on Android devices and apologize for the confusion. We will update everyone with an official release date as soon as it is available.

The game is still up on the Play Store as of 5 PM Eastern time, but may be taken down soon.

Bethesda Softworks strategy card game The Elder Scrolls: Legends has just appeared on the Play Store again as an updated version. So far it appears like only a few select tablets can install the latest release. Whether that means the game will be tablet only is still unknown.

Those of you who have the ability to install, feel free to sound off in the comments and let us all know how it plays.

After a long beta, the official version is out today.

That is right, after what has felt like a really long beta process, The Elder Scrolls: Legends is now available for Android. Keep in mind that this is a tablet only release. Yep, no phones allowed, sadly. You can pick up The Elder Scrolls: Legends for free, though you can still expect in-app purchases that range up to $69.99 per item. For those that would like to read the full official release announcement, you can check it out over at bethesda.net.