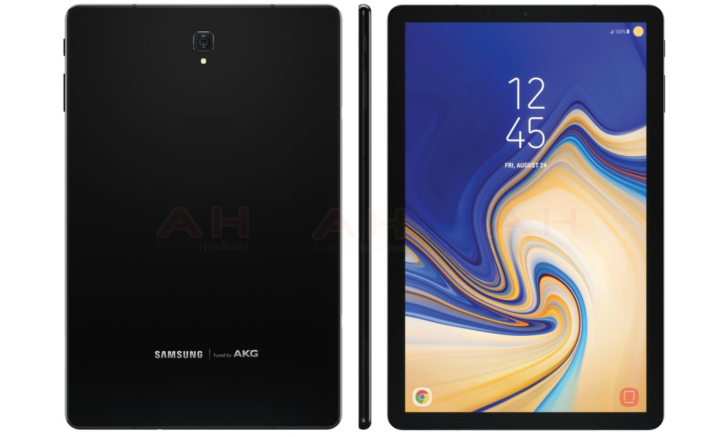 It doesn't seem like that long ago, but the Galaxy Tab S3 officially debuted almost one-and-a-half years ago. In other words, it's overdue for a replacement. We'd heard about the Tab S4 passing through the Wi-Fi Alliance and the FCC, but hadn't seen it in photos - that is, until now.

The most striking part of this image is obviously the front. Whereas the Galaxy Tab S3 had a 4:3 screen surrounded by thick bezels all around with physical buttons on the bottom, the Tab S4 looks to have a 16:9 display with much slimmer bezels and no physical home or capacitive buttons. It makes the tablet look a lot more modern, though the fact that there's no fingerprint sensor visible must be mentioned. It's possible that Samsung will include an in-display sensor, though that's unlikely. It does look like there's an iris scanner up top, which might be all we get for biometric security.

Spec-wise, the Galaxy Tab S4 is expected to have a Snapdragon 835, 4GB of RAM, 64GB of storage, a 13MP main camera, an 8MP front-facing camera, and a 7,300mAh battery. Android 8.1 Oreo and DeX support are expected as well. Chances are that we'll be hearing more about the Tab S4 on August 9th, so we've probably got a little over a month to wait.

Evan Blass has opened the leak-gates on the Tab S4 with three images of the optional keyboard cover and pen as well as the back of the white variant.

More of that "white." pic.twitter.com/pQltterQJv