Updated: iPhone 5: all the latest details 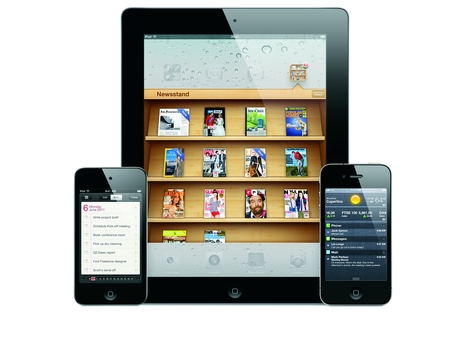 4 October is new iPhone day and TechRadar will be at the Apple press event to bring you all the iPhone news as it breaks.

We'll add links to our coverage below - news, opinions, initial thoughts and reviews. The event kicks off at 6pm BST today, so bookmark this page and come back then to see what Apple has announced.

Below are the rumours that we've reported on leading up to today's press conference.

iPhone 5 (or the iPhone 4S, as some are calling it) rumours have been flying thick and fast for months.

And now Apple has finally confirmed a press conference for Tuesday 4 October, where the company will almost certainly unveil the iPhone 5.

The invitation hints that it will be one phone that is announced, which is likely to be the iPhone 5 rather than the much-discussed iPhone 4S.

Check out what TechRadar is hoping makes it into the next iPhone, in our video wish list:

And if you're in a bit of a hurry, we've also got a handy iPhone 5 video detailing the latest rumours on release date, spec and more - so check if out for a quick fix of next-gen Apple fun:

In mid September the CEO of France Telecom (the parent company of Orange) got specific when commenting on the iPhone 5 release date, saying "If we believe what we have been told, the iPhone 5 will be released on 15 October."

Price cuts of the iPhone 4 in August hinted at an autumn release for the iPhone 5 or iPhone 4S and Apple reportedly began pushing up the amount of orders for the handset.

In early September, Japanese site Macotakara reported that the iPhone 5 had entered production, saying that Foxconn and Pegatron had begun assembly on the new handset. A few days later, Digitimes wrote that Foxconn was producing 150,000 units of the new iPhone per day.

Rumours of a UK Apple Store holiday ban also emerged on 26 September.It was also reported that Telefonica, which owns the O2 network, is set to begin scaling back iPhone stock in advance of "the launch of a new smartphone".

However, it may not all be plain sailing for Apple, with rumours that Samsung will seek a sales ban courtesy of an injunction- another piece of the increasingly mixed up lawsuit puzzle between the pair.

The iPhone 5 will debut alongside iOS 5 and iCloud

Apple Chief Financial Officer Peter Oppenheimer was asked during an earnings call why he was suggesting a 12 per cent drop in revenues for the Q3 financial period - a traditionally robust time thanks to the scores of people buying the latest iPhone.

He said that there is "a lot going on in the fall with iOS 5 and iCloud" but added there will be a "future product transition that we will not talk about today".

That's almost certainly the new iPhone 5. And iOS 5 will arrive alongside it as well iCloud. 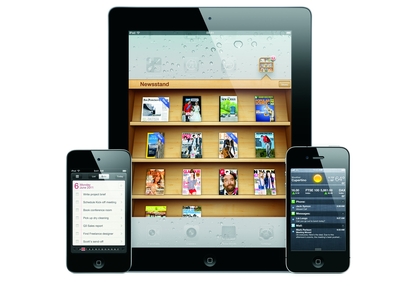 Apple says it is "cutting the cable" with iOS 5- just as well, as it claimed the iPad 2 was the first post-PC device earlier in the year. OS updates can be delivered over the air - you'll just received what's changed rather than the usual 600MB download - and devices can be activated without plugging them into iTunes.

You can also now create and delete iOS calendars and mailboxes too, so you really can devolve your device from your PC or Mac.

"You can activate on the device and you're ready to go," explained Apple's Scott Forstall.

"Software updates are now over the air. So you no longer need to plug in to update your software. And they're now Delta updates. Instead of downloading the whole OS, you only download what's changed," he continued.

The Wall Street Journal has previously reported that: "Apple is also developing a new iPhone model, said people briefed on the phone. One person familiar said the fifth-generation iPhone would be a different form factor than those that are currently available… it was unclear how soon that version would be available to Verizon or other carriers."

This has since been backed up by reports from Engadget, which state the design will be a 'total rethink'.

Chinese case manufacturers have been sent design briefings of the new iPhone 5 chassis and apparently feature a return to the old days of iPhone design. But could iPhone 5 really have a curved back? We can't begin to tell you how sceptical we are over such a 'leak', given Apple's desperation to keep its forthcoming designs under wraps.

However, earlier reports from China backed up the larger-screened, metal chassis-sporting iPhone 5 rumours, so the redesign still seems firmly on the cards.

Interestingly, an Apple patent that we reported on on 7 April 2011suggests that we could see the bezel put to good use on the new iPhone. The patent describes how visual indicators and touch-sensitive buttons could be incorporated to the space around the iPhone screen.

Could the iPhone 5 have a new type of voice control? Know Your Mobile thinks so, Called Assistant, it could be used to play back music, send texts and make Facetime calls. This has beencorroboratedby numerous sources including 9to5mac.com.

The phrase 'let's talk iPhone' from the press conference invite has also immediately been linked to a rumour that Assistant will be a key feature of the next generation phone.

Will iPhone 5 actually be an iPhone 4S?

Of course, since the iPhone 3G was followed by the 3GS it's possible the new iPhone won't be a total refresh and we'll see an iPhone 4S (or iPhone 4GS) before an iPhone 5.

An iPhone 4S looked more likely on 16 May 2011 after analyst Peter Misek wrote: "According to our industry checks, the device should be called iPhone 4S and include minor cosmetic changes, better cameras, A5 dual-core processor, and HSPA+ support."

Rumours that we covered on 3 May 2011, suggest that there may even be two versions of the new iPhone: a 'standard' iPhone 5 and an iPhone 5 'pro'. Apparently, Apple is buying in components of differing quality, and those parts wouldn't be required for a single phone.

A prototype version of a smaller iPhone is said to exist, built to ward off competition from cheap Android handsets.

Rumours around an iPhone nano picked up again on 13 February when the Wall Street Journal claimed that the so-called 'iPhone nano' exists and may even be on sale later this year.

On 23 August Reuters reported that two anonymous sources "with knowledge of the matter" confirmed to it that an 8GB flash drive for the iPhone 4 is being built by a Korean supplier - this could be the cheaper iPhone.

The Economic Daily News is reporting that white iPhone 5 glass is being shipped, with a supplier called Wintek being the sole touch panel vendor for the white iPhone.

On 12 September 2011, a page which briefly popped up on Vodafone's site referenced the iPhone 5 in white as well as black.

It's fairly likely - given that the iPad 2 supports Full HD - that the new iPhone will do the same.

According to the Chinese Economic Daily News (via AppleInsider), with the exception of Qualcomm chipsets - which would replace the current Infineon chipsets in the iPhone 4 - Apple's sticking with the same suppliers for the 2011 iPhone 5G components.

We'd expect the basics of the iPhone 5 specs to get a bump - more memory, faster processor, and more storage. The A5 dual-core ARM processor from the iPad 2 is extremely likely to be included.

The specs? A new antenna, 1.2GHz processor (possibly dual-core) and a larger screen: 3.7" instead of 3.5". The iPhone 5 may also be made from a new kind of alloy, or maybe meat.

On 12 September 2011, a page briefly appeared on the Vodafone site referencing the iPhone 5 in 16GB and 32GB storage, and in white as well as black. Other sources expect double the RAM of the iPhone 4, so that would be 1GB instead of 512MB.

On 20 September a bunch of internal iPhone 5 components were supposedly shown off.

Various sources claim the iPhone 5 will feature a larger, 4-inch screen. Digitimes quotes the source as saying that Apple is expanding the screen size "to support the tablet PC market as the vendor only has a 9.7-inch iPad in the market."

On 23 May, we reported on rumours that the iPhone 5 could feature a curved glass screen. These rumours also came from Digitimes, which said that Apple has purchased between 200 and 300 special glass cutting machines because they're too costly for the manufacturers to invest in.

The iPhone 5 or iPhone 4S will also get a massive graphical boost as it moves to a dual-core GPU - this will herald true 1080p output from the new device.

There's been some speculation that Apple might include Near Field Communication (NFC) technology in the iPhone 5G, turning it into a kind of credit/debit card. However, as Techeye.net notes, "Apple has looked into NFC before" so this might not be imminent.

However, with the tech being inside the Google Nexus S, the time for NFC may finally be here.

On 24 June it was reported that the Google Wallet mobile payment platform could feature on the new iPhone. Eric Schmidt admitted that Google is looking to port the software to other manufacturers.

At least one analyst thinks the iPhone 5 will support LTE, super-fast mobile broadband, in the US. That would make the iPhone 5G a 4G phone, which won't be confusing at all. LTE is certainly coming - AT&T plans to roll out its LTE service in 2011 - but an LTE iPhone has been rumoured for a while. USA Today floated the idea of an LTE iPhone on Verizon last year.

According to PCWorld.com, there's a reference to 4G technology in the code of iOS 5, while carriers have been testing 4G-enabled iPhone prototypes and Apple has hired 4G network engineers to outfit one of its Apple Stores.

Speaking at a live Wall Street Journal event, Sony's Sir Howard Stringer was talking about the company's camera image sensor facility in Sendai, a town that was recently ravaged by the recent Japanese earthquake and tsunami.

According to 9to5Mac, he said something along the lines of, "Our best sensor technology is built in one of the [tsunami] affected factories. Those go to Apple for their iPhones… or iPads. Isn't that something? They buy our best sensors from us."

Other sources have also said that the new iPhone could have an 8MP camera.

On 8 September 2011 photo taken by an iPhone appeared on Flickr, but the EXIF data revealed that the camera is superior to that on the iPhone 4. Could this be the first pic snapped by the iPhone 5 in the wild?

If the iPhone 5 is an evolutionary step like the move from the iPhone 3G to the iPhone 3GS then we'd expect the price to stay more or less the same, although in the UK higher VAT rates may well mean a higher price tag.

TechRadar is renowned for it's detailed phone reviews where we look at every aspect of a handset, and we'll be bringing you a full, in-depth iPhone 5 review when we get our hands on one.