U.S. unlocked Galaxy S7 Edge models now have Android 7.0 Nougat thanks to Samsung’s Smart Switch software. If you have this device and you don’t have the software installed on your computer, now would be a good time to install it if you want to move your smartphone’s software version forward to the latest version of Android that’s currently available. That being said, you’ll need to have Smart Switch on your smartphone as well and this is an application which you can grab from the Play Store rather easily.

As for the update, it comes in at 2264MB which is a little bit over 2.2GB in size which means you’ll want to have a fair amount of free space on your phone’s internal memory. As with any update, it’s also a good idea to make sure that you have plenty of battery life to allow the time needed for the update to complete, which will include the download of the software as well as the actual installation after the file has been downloaded.

When it comes to the changes that come along with the software, the obvious change is the bump in OS version from Marshmallow to Nougat. As for actual functionality though, users with the unlocked Galaxy S7 Edge in the U.S. will finally get their hands on Nougat specific features like the improved doze mode, some new performance modes, some changes to the UX, and quite a few improvements to a few different areas of the device which were already available, like multi-window, notifications and quick settings, and improvements to the settings menu and Samsung Pass. Some details highlighted by Samsung via the Smart Switch software targets users of the Gear IconX truly wireless earbuds, suggesting that users should update their headphones to the latest software before they update their Galaxy S7 Edge to Android 7.0 Nougat. Samsung doesn’t go into detail as to why you’d want to do this, but chances are it has to do with some inconsistency or incompatibility issues between the earbuds and the phone if this process isn’t done the way Samsung describes. As always, it’s also a good idea to back up your important data and personal information in the event that something gets lost during the upgrade. 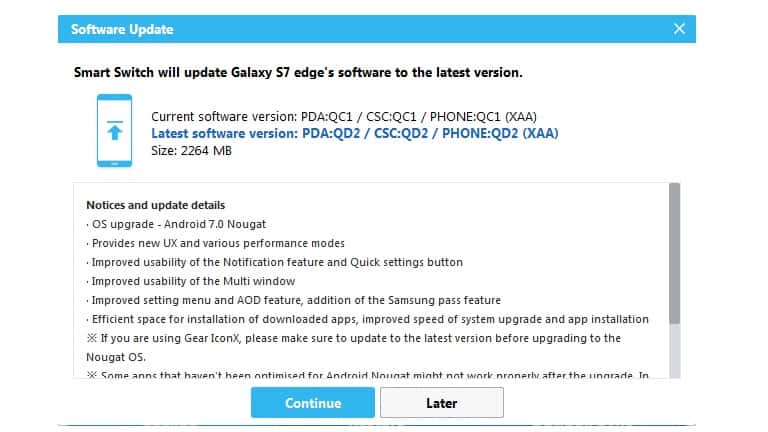