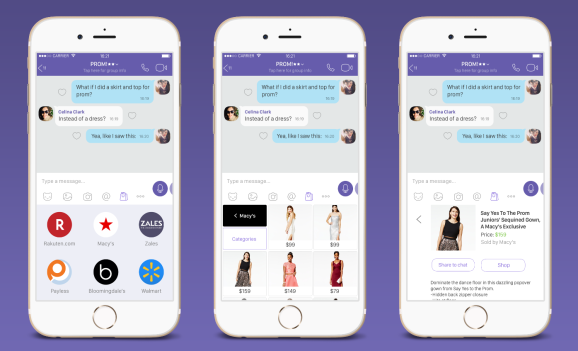 Founded out of San Francisco in 2016, ShopChat is a downloadable iOS app that replaces your device’s default keyboard app and works across all major messaging apps, including WhatsApp, iMessage, and Facebook Messenger. Through the keyboard, users — possibly shopaholics — have direct access to shopping inventory from major retailers and can easily search for and share products with friends.

ShopChat also offers a white-label product that third-party apps can integrate directly into their own services via an API.

The startup had raised a little more than $1 million in seed funding, with Japanese ecommerce giant Rakuten serving as lead investor in the round back in March. Rakuten also happens to own Viber, after acquiring the Israeli company in a $900 million deal back in 2014. And Viber had already integrated ShopChat’s technology into its messaging app, with Viber claiming that 30 percent of its U.S. users have used the feature since its launch.

With Rakuten’s investment and Viber’s integration, you can probably see how this acquisition really starts to make sense.

Chatter Commerce has a team of seven engineers based out of San Francisco, and they will now join Viber, with Chatter Commerce CEO Zephrin Lasker becoming global head of ecommerce at Viber. In this capacity, he will “steer the company’s global mobile commerce strategy” and help push the service into new markets, according to a statement issued by the company.

“This investment is a new step in our journey to transform Viber into a multi-service communication platform,” noted Djamel Agaoua, who joined Viber as CEO back in February. “We want to bring more value to our hundreds of millions of users around the world, while keeping the experience simple and seamless. Chatter Commerce’s technology will actively support our vision, and their team is a perfect fit for our culture of innovation.”

Founded in 2010, Viber — which recently changed its corporate name to “Rakuten Viber” — has grown to more than 800 million users globally. It hasn’t made many acquisitions before now, the only known deal was back in 2015, when it shelled out a reported $9 million to buy Nextpeer, a startup that creates a cross-platform social layer for mobile game developers.