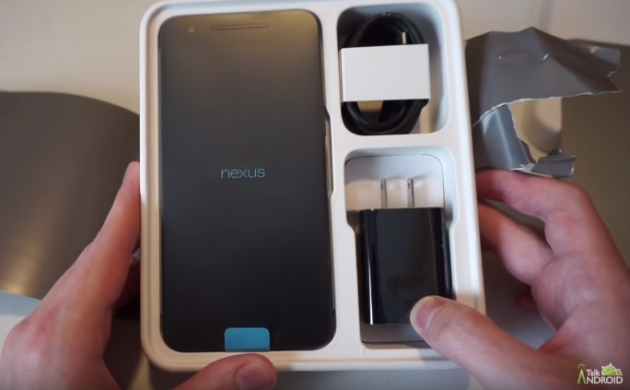 With Google I/O coming up later this month, odds are good that interest in Google’s next round of Nexus smartphones may see a bit of an uptick. Likewise, bargain hunters may start eyeing current Nexus devices, including the Huawei-produced Nexus 6P, in hopes of price drops to clear out stock. Despite being a bit late on finally getting a device that was released last fall, TalkAndroid’s Justin Herrick recently got his hands on the Nexus 6P and put together an unboxing video.

One technology that Google’s Nexus line was early in adopting in the market for Android phones is the use of a USB Type-C port for charging or connecting to other devices. As seen in the video, two cables are included in the box. The first is a Type-C to Type-C cable meant to be used with the wall charger that is equipped with a Type-C outlet. However, to help with some backwards compatibility and to not render buyer’s stable of wall chargers completely useless, the box also includes a Type-A to Type-C cable. While a bit on the short side, it will enable the use of older USB ports whether it is in another computer or in a wall charger.

The unit getting the unboxing treatment is in the graphite color, but consumers can also get the Nexus 6P in frost, aluminum or gold. With a large 5.7-inch screen, the Nexus 6P is still described as “comfortable in the hand” with a “premium” feel to it.

Check out the unboxing video below and be sure to what TalkAndroid for more coverage of this device and many others.

Come comment on this article: [Video] Unboxing the Nexus 6P