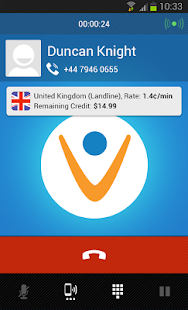 The latest update for the Vonage Mobile app has arrived in the Google Play Store. This one is adding a new feature called "ReachMe Roaming" and it brings the promise of eliminating international roaming charges. Essentially, this setup means users will be able to receive incoming calls, but not have to worry about the possibility of overage charges while traveling.

Naturally, there are some good and some bad points here. First, to clarify, they are talking about routing your incoming mobile calls, which means you'll still be able to receive calls from your mobile number. On the flip side, those calls are being routed over WiFi, which means you'll need to be looking for WiFi hotspots to stay fully connected.

Vonage did say the ReachMe Roaming feature could be used over 3G/4G, but of course, that would incur data charges. Users will be able to toggle ReachMe Roaming on and off directly from the app settings. One other point worth mentioning, if you have it set to route only when on WiFi -- callers will be able to leave a voicemail, and you will get a notification once you are connected.

Along with ReachMe Roaming, this latest update also added call waiting, which will work with both voice and video calls. The Vonage Mobile app can be downloaded using this Google Play Store link.