Warning: you might not want to come back to the real world after adventuring through this 5-in-1 BOXED SET ALERT! To The Stars And Back by C.F. Barnes & T.F. Grant

To the Stars and Back: 5 Book Science Fiction Bundle 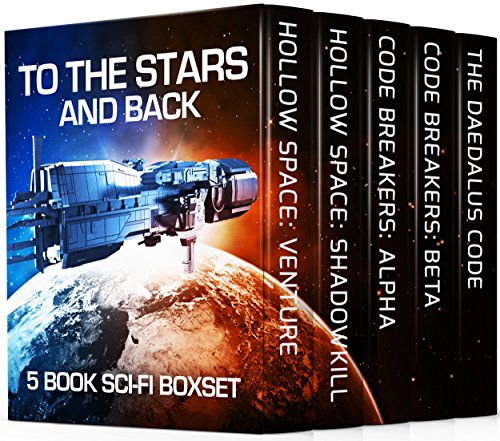 4.0 stars – 52 Reviews
Kindle Price: 99 cents
On Sale! Everyday price:
Or currently FREE for Amazon Prime Members Via the Kindle Lending Library
Text-to-Speech and Lending: Enabled
Don’t have a Kindle? Get yours here.

To the Stars and Back is a collection of books that range from Space Opera to Near-Future post-apocalypse and many stops in between. If you like fun, adventure, and interesting tech, you’ll be sure to love something within this collection. Comprising three full-length novels, and two novellas, these stories will keep you entertained for many hours.

Warning: Readers might not want to come back to the real world after adventuring through these stories.

Hollow Space: Venture
Forced to hyperjump during a brutal ambush, Sara Lorelle, navigator of the last human colony ship, discovers they’ve jumped to somewhere that shouldn’t exist.
Trapped inside a pocket universe known only as Hollow Space, where technology inexplicably fails, Sara and her crew have to face the lethal politics of their only destination: Haven—a decrepit space station, home to hostile aliens and rival factions that soon sees the Venture crew up to their necks in trouble.
With their only hope placed in Tairon Cauder, a reckless scoundrel, they will battle impossible species, confront their fears, and uncover ancient and terrible secrets. In a place where those who shoot first live the longest, the Venture crew will have to push their limits if they are to save themselves and the human race from extinction.

Hollow Space: Shadowkill
Kina wants to be an assassin—to join the mysterious Wraiths and secure her future on the space station of Haven. A place where it’s kill or be killed and career options are limited. But Haven is not your granddad’s space station. It’s rotten to the core and every scumbag is out for one thing only: themselves. With just her two daggers for protection, Kina is thrown into the darkness to confront a pack of bounty hunters eager to end her ambitions—and life.

Code Breakers: Alpha
In a post-apocalyptic future, humanity survives within a single domed city run by a shadowy benefactor known only as The Family. Each week the death lottery claims more lives and Gerry Cardle, head of the lottery, inexplicably finds himself the next on the list. Something’s wrong with the system. A deadly artificial intelligence has breached security. Gerry has just 7 days to live. Forced off the grid, Gerry has to do the unthinkable: willingly leave the city. What he finds in the abandoned lands will shatter his perception of what it means to be human. Everything he had been told before was a lie.

Code Breakers: Beta
The fanatical Red Widows sweep destruction across the abandoned lands. Their aggression threatens to destroy the city Gerry had risked his life to save. Petal, the woman Gerry has come to love is dying. The despotic cabal, The Family, demand he brings her to them, but she’s missing, running from the Widows, searching for the truth of her origins before it’s too late. When their paths cross, Petal and Gerry will hold the fate of humankind in their hands—if they can survive the malevolent digital entity that stalks them from the shadows.

The Daedalus Code
When agents Phaedra and Aegeus of New Crete’s Intelligent Data Enforcement Agency are tasked to find five missing Artificial Intelligence students, their single lead takes them to a notorious hacker known as ‘The Cretian.’ With his help, they uncover a terrible truth: Ariadne, one of the students, is involved with a rogue AI program called The Daedalus Project. The AI is out of control, people are going missing, and a great swathe of the world’s data is being secured within its digital labyrinth. Putting all their trust in the hacker, not only are the agent’s careers and the student’s lives in jeopardy, but also the very freedom of the public hangs in the balance. Their only hope lies in The Cretian, a rogue hacker who’s only out for himself.

“This books in this box set will get you thinking – in Code Breakers Alpha and Beta, for example, the author does a great job of getting you inside the head (pun intended) of his characters, and what I found refreshing for this one was he doesn’t try to overwhelm you with the future technology or situations in a post-apocalyptic world: we’ve all read SF where you want to call b.s. on a futuristic technology but in this case it’s believable, and you can wrap your arms around it and understand it. The action scenes are fairly realistic, and you will find your pulse racing (mine did) at various times as you feel as if you are right there.”

“Some of the best sci-fit chapters I have ever encountered. The good and the bad alike. Plots are nothing without believable characters and Barnes’ are so well-written that you can live ’em, hate ’em, cheer them on or wish them dead and gone! ”

Warning: you might not want to come back to the real world after adventuring through this 5-in-1 BOXED SET ALERT!
To The Stars And Back by C.F. Barnes & T.F. Grant