Motorola’s “made-in-America” proposition has been very interesting ever since the company announced that all Moto X handsets would be assembled here in the United States. They do that at the Fort Worth, TX plant that added over 2,000 new jobs to the area. We’d already gotten a sneak peak inside the plant through some nice Google Maps Street View trickery, and now we’ve gotten full-on video of what goes on inside. 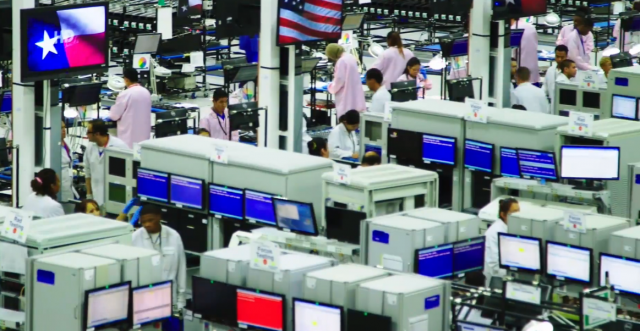 The deed was done by Engadget, who was on hand for the special visit by Google chairman Eric Schmidt and Texas governor Rick Perry. In the video, you’ll hear CEO Dennis Woodside comment on why they aren’t worried about the Moto X costing a few dollars more to produce in the United States as opposed to overseas (where labor is cheaper and there is no burden for maintaining a facility of their own):

“It does cost a little bit more to make the product here, but not so much more that it changes the overall economics. And we think over time we’ll recoup that investment, because we’ll be able to improve the productivity of the plant much faster, and also improve our designs much faster.”

Also noted is the importance of the plant’s location, which is fixated within the heart of a major shipping hub. It’s that strategic placement (among other things) that helps Motorola turn device shipments around in less than a week.

Watch the video at the source link, and stay tuned past the conclusion to see a video of Rick Perry tossing an iPhone to the ground upon being presented with a Moto X  by Dennis Woodside.