Well, Helllooooo, New iPad Air. Have You Done Something Different With Your Hair? 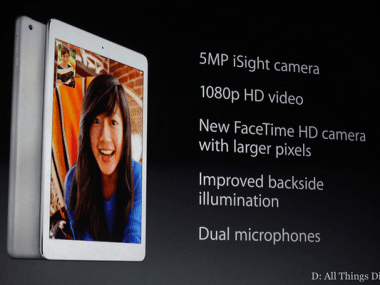 Okay, okay, we knew this was coming. And, despite the fact that its general newness is probably more important than the feature-y stuff, there are still a lot of consumers who will want to know the specifics about this new iPad — especially since it has a new name. So, here goes:

The new, 9.7-inch iPad is 43 percent thinner than the previous generation of iPad. And lighter. It’s so thin and light that Apple has borrowed the name from its ultra-thin laptops and renamed it the iPad Air.

IPad Air! How did we not think of this before?! How was it possibly not leaked to the rabid tech press ahead of today’s event?

It also has a five-megapixel camera and the new front-facing FaceTime camera that’s in Apple’s new iPhones.

At the risk of sounding like I’m in a media echo chamber here, the iPad is important to Apple. Like, very important. Twenty-percent-of-the-company’s-revenue-last-year important.

To date, 170 million iPads have been sold, Apple CEO Tim Cook said at the event today. “Now everyone seems to be making a tablet. Even some of the doubters are making them,” he said. “But no matter how many you read about are activated, iPad is used over four times more than all of the other tablets put together.”

But iPad sales have been cooling (to use another word commonly heard in the chamber). As smart analyst Benedict Evans points out on Twitter, “170 million iPads passed in October, 155 million in June … So under 15 million units in the fourth quarter. Flat sales. No surprise pre-refresh” (I’ve tweaked his tweet a bit).

Last quarter, the company sold 14.6 million iPads. Sounds like a lot of iPads, but that was fewer than the 17 million it sold in the year prior, and well below the 18 million analysts had been predicting.

So, this particular iPad is critical for Apple, especially as another holiday season approaches.