What happens when Tesla Model S runs over a Samsung Galaxy S 5? 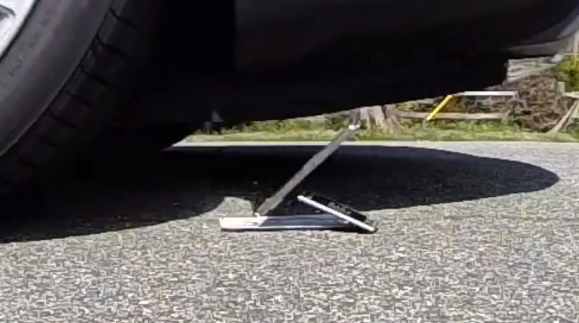 Seems like an odd question, which can only be a sign that someone gave it a try. Twitter user @iCrackUriDevice decided to do some drop tests of the new Samsung Galaxy S 5. The goal of these and other drop tests involving Samsung devices is often to assess how well the plastic used for the Galaxy S 5 holds up compared to “better” materials like the metal used for the iPhone or an HTC smartphone. Samsung has stated they use plastic not only to control costs, but because the increased flexibility improves survivability. In addition to drop tests, @iCrackUriDevice decided to see how the Galaxy S 5 would hold up to pressure under the wheels of a Tesla Model S.

In the video, through three drop tests the Galaxy S 5 suffers cosmetic damage to the edges of the device and the back cover. However, the glass survives without cracking and the device remains functional. When placed under the wheels of the Tesla Model S, the damage is more extensive with the camera biting the dust and the back cover becoming useless for most purposes. The good news is the smartphone survives and continues to operate.

Check out the video below to see just how the Galaxy S 5 fared.

Come comment on this article: What happens when Tesla Model S runs over a Samsung Galaxy S 5?