What would happen if terrorism spread and hate took over? What would the world become?S.P. Cervantes’ epic tale of fate and survival: AN IMPOSSIBLE WORLD 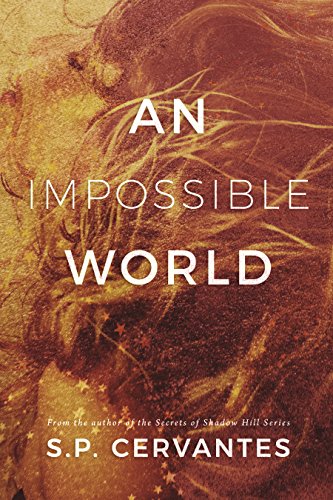 4.8 stars – 9 reviews
Kindle Price: 99 cents
Everyday Price:
Text-to-Speech and Lending: Enabled
Enjoy S.P. Cervantes’ Books? Tell us Why and Win a Free Book!
Don’t have a Kindle? Get yours here.
Here’s the set-up:

What would happen if terrorism spread and hate took over? What would the world become?

Isabella (Belle) Grey trained her entire adult life to protect those around her––training that would prove invaluable in her quest to make a new life. Forced to live in an impossible world, terror was not only outside the walls of her protected community but also raged behind the walls of her very own home.

No longer willing to put up with her husband’s drunken abuse, Belle made the desperate decision to run away from the safety of her community and escaped alone into the broken world beyond.

Chased by death as bombs exploded in the distance, her next decision could not only save her life but could potentially bring light back into her darkened soul.

When faced with the impossible, Belle found strength in an unsuspecting stranger who set her path in a new direction––one she never considered.

Fear. Love. Revenge. Strength … all come together in this epic tale of fate and survival.

“An Impossible World is a wonderful book. I loved how well the characters were described. I felt they came alive on the page. Cervantes is an author who shows such an eclectic taste, she continues to surprise and entertain as well as grow as a writer.” 5 star review

The post <p style="text-align:center;font-weight:bold;">What would happen if terrorism spread and hate took over? What would the world become?<br />S.P. Cervantes’ epic tale of fate and survival: <em>AN IMPOSSIBLE WORLD</em></p> appeared first on Kindle Fire on Kindle Nation Daily.