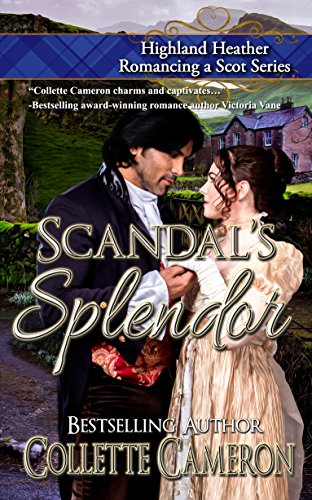 4.7 stars – 54 reviews
Kindle Price: FREE!
Everyday price:
Text-to-Speech and Lending: Enabled
Available on Audible
Enjoy Collette Cameron’s Books? Tell us Why and Win a Free Book!
Don’t have a Kindle? Get yours here.
Here’s the set-up:

She can see the future. Dare she tell what she knows?

A determined Scottish lady
Seonaid Ferguson, a lady of Craiglocky Keep, is through with London’s Marriage Mart. After learning she has the second sight, the haut ton attempts to exploit her abilities. Even though it means she condemns herself to spinsterhood, Seonaid sets a desperate course to rid herself of her gift turned curse. As she rushes home from England, a snowstorm strands her in a crowded inn with the last man she ever wished to see again. A handsome French baron who once thought her a courtesan. And just her misfortune, only he stands between her and certain harm.

An honorable French nobleman
Jacques, Monsieur lebaron de Devaux-Rousset, ventures to Scotland to oversee his new investment; a silver mine near Craiglocky. Only a handsome profit will save his family’s destitute estate in France. But when the mine is beset with one problem after another, Jacques must instead search for an heiress to wed. He certainly should not be falling in love with the lovely, spirited sister of Laird Ewan MacTavish. A lass whose dowry is insufficient to restore his ancestral home. Nor should he consider, even for a moment, her risqué, but deliciously tempting scheme to rid her of the second sight.

A danger most dire
Matters are torn from their hands when a dangerous adversary vows to expose Seonaid as a witch, just as Jacques’s problems at the mine escalate into deadly violence. Is it by chance, or a dark design, that both of them are beset at once? Dare Jacques and Seonaid throw caution aside and forge a future together?

Though this book is part of a series, it is a stand-alone novel.

Be sure to check out the Castle Bride Series which inspired the Highland Heather Romancing a Scot Series. You’ll meet some familiar characters.

“You won’t be disappointed, because when you start reading this book, you will not be able to stop.” ★★★★★~Books and Benches

“Collette is a master at awakening the desires and dangers that will leave you breathless and wanting more.” ★★★★★~The Reading Wench