Why Is Apple Still Selling the iPad 2? Because It Can. 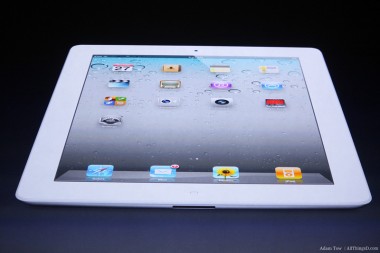 Next month Apple will begin selling two next-generation iPads — the iPad Air and a new and mightier iPad mini, yet it will continue to sell the iPad 2, a device that’s been on the market since March of 2011.

Why keep a nearly three-year-old tablet in the iPad line? Because it continues to sell fairly well.

According to new research from Consumer Intelligence Research Partners (CIRP), even as more consumers gravitate to the Retina displays and speedy chips of the top end of the iPad line, plenty are happy enough with the iPad 2.

According to CIRP, the iPad 2 accounted for 22 percent of the iPads sold in the United States during the quarter ended September 30, 2013. Now that’s down from the 35 percent it accounted for in the quarter prior, but it’s still a significant percentage. Clearly, some sectors of the tablet market still have a need for the device and its old-school 30 pin connector — the education marker, perhaps, where we’re increasingly seeing more budget-conscious iPad deployments. And that’s just fine with Apple, because the profit margins on producing the older device are probably sizable. 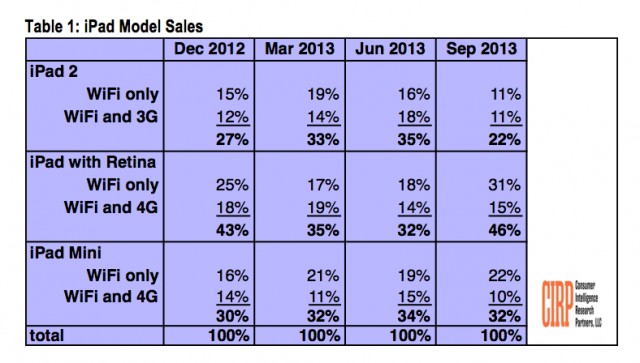 “The conventional wisdom on the iPad 2 is that education and corporate customers still need that device,” CIRP co-founder Josh Lowitz told AllThingsD. “But we think that consumers are going to show less and less interest in it. Already we have been seeing some decline in the iPad 2 share of overall iPad sales.”

Now, with the iPad mini with Retina display debuting at the same $399 starting price and the original iPad mini dropping to $299, the decline could accelerate. We’ll see.

A few other points from the CIRP study worth noting.

First, iPad mini sales have held steady at about one-third of total iPad sales since the December quarter of 2012.

Second, the older an iPad generation becomes, the better its lower end configurations sell. For the quarter CIRP analyzed, the 128GB and 64GB versions of the iPad with Retina display accounted for 13 percent of total U.S. sales for that model, down from 30 percent the previous quarter. Meanwhile, the 16GB iPad mini accounted for 73 percent of mini sales, up from 50 percent in the quarter prior.

So late iPad adopters may be more price sensitive than their early adopter counterparts and gravitate to the lower cost models as a result. Makes sense. CIRP figures this is all just part of the natural life cycle of product adoption.

“We are starting to see the life cycle of iPad ownership,” Lowitz said. “Unlike phones that are primarily linked to two-year contracts, iPads have no expiration date. In that way, they are more like computers, or iPods, or televisions — an electronic device that can last a long time, and when you ‘outgrow’ it, you hand it down or find a secondary use for it.”