Will the iPhone 6 Have a Bigger Screen? Rumors Say Yes 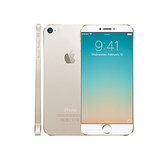 The next iPhone will boast a bigger screen, according to the tech rumor mill, and it's expected to see the light of day very soon. Apple's WWDC developer conference is right around the corner (June 2-6), but we're expecting the iPhone 6 news to arrive sometime in September 2014, which is traditional of most Apple mobile device releases. But, you never know, Apple is certainly one for surprises.

What should you expect from the next-generation iOS smartphone? Probably something a lot like the iPhone 6 concept below, by Behance user Edgar Rios. It's rumored to have slightly thinner hardware and a larger, wider screen. Read on for all of the iPhone 6 speculation around the web!