Arkady Rossovich, known as the mutant super-soldier Omega Red, is the newest member of the Marvel universe to join mobile fighting game Marvel: Contest of Champions. Omega Red hits the game in the same form he’s been seen in since his comic debut, and with a host of abilities and synergy boosts that nod to his previously established in-universe capabilities and relationships. A quick look at the stats will tell you that this is a high-class character who is probably hard to acquire. As to strategy, Omega Red’s Death Factor and high attack make him a great choice as a DPS character, and he’s a perfectly viable team lead thanks to his high HP. He is definitely not a support character or a tank.

The basic four-star version of Omega Red comes with 15,052 health and 1,216 base attack. With a fully maxed-out five-star version, you’ll see those boosted to 30,179 health and 2,437 base attack. His Max PT, meanwhile, can go all the way up to a whopping 10,160. His most prominent passive ability is Death Factor, which drops armor-lowering Death Spores on foes when they’re close by. If he’s bleeding, these sports actually damage enemies. Many of his special attacks and abilities use Death Spores in some way or can be powered up by them, and an opponent with more than 10 Death Spores on their person will find that they’re slightly damaging even while Omega Red is not bleeding. He can also bypass all passive payback damage attributes and buffs by attacking with his powerful tentacles, making him a great foil to characters like Killmonger whose strategies are predicated on those abilities.

On the topic of synergy, he gets an attack boost from Colossus and gets stronger Bleeds from Wolverine. His other beneficial pair-ups include Deadpool, Sabertooth, Red Skull, Red Hulk, Mephisto, and Void. As a side note, since Omega Red is in the Mutant character class, he is immune to poison. His Death Spores also affect robot characters four times slower than others, no matter how many are present, and this includes when he’s using his special Death Field attack to spread Death Spores at a faster pace. He should be live in the game for all players on all platforms as of this writing. 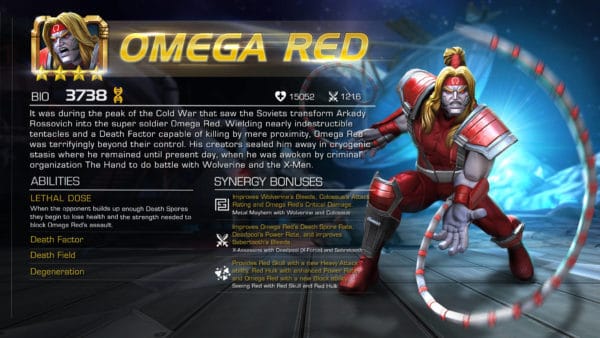