Xiaomi X1 Leaks, Redmi Pro 2 Rumored To Have Been Scrapped

The Xiaomi X1 is the subject of a new leak and it appears that it could release instead of the much-rumored Xiaomi Redmi Pro 2. There have been plenty of leaks about the Redmi Pro 2 in recent months, with expectations that it could be announced in the coming weeks, but the latest leak from Weibo not only gives some details on the Xiaomi X1 but also suggests that the Redmi Pro line might have been canceled, although the Beijing-based electronics company has yet to comment on the matter in any capacity. An industry insider said that the Xiaomi X1 will be the first in a new range of Xiaomi X-series smartphones and that the firm will release both a regular display version and a full-screen model of the handset.

The superior full-screen variant of the Xiaomi X1 is said to have a 5.5-inch Pegasus display with a resolution of 2160 x 1080, the Snapdragon 660 SoC, a fingerprint scanner on its back plate, and a rear dual camera arrangement with IMX362 or IMX386 sensors. The size of the display for the alternative model with a standard screen is not stated, although it’s more likely to have Full HD resolution of 1920 x 1080. The second variant will also be powered by the Snapdragon 660 processor and will have a fingerprint reader, although its scanner could be on the front of the device instead, according to the leak. Along with those details, some pricing for different storage variants has been provided by the insider. The details are not entirely clear but it seems that the regular version might come with 4GB of RAM and 64GB of internal storage, while the more premium variant may feature 4GB of RAM and 128GB of internal storage. Meanwhile, the superior model with the full-screen design looks likely to be offered with 6GB of RAM and either 64GB or 128GB of flash memory. The leaked pricing for the various Xiaomi X1 smartphones ranges from as low as 1,999 yuan (around $294) 2,799 yuan ($412). The newly uncovered image below this writing is claimed to be a TPU case for the device and is clearly labeled as having been designed for the X1.

It has been suggested that this new X1 smartphone could be the Xiaomi ‘Jason’ device that showed up on GFXBench website last month, with that model being previously rumored to be the Xiaomi Mi 6X. Meanwhile, only last week there was a new leak pertaining to the Redmi Pro 2, so it might be somewhat surprising if the newly leaked Xiaomi X1 were to arrive instead of the Redmi Pro 2 in the near future. 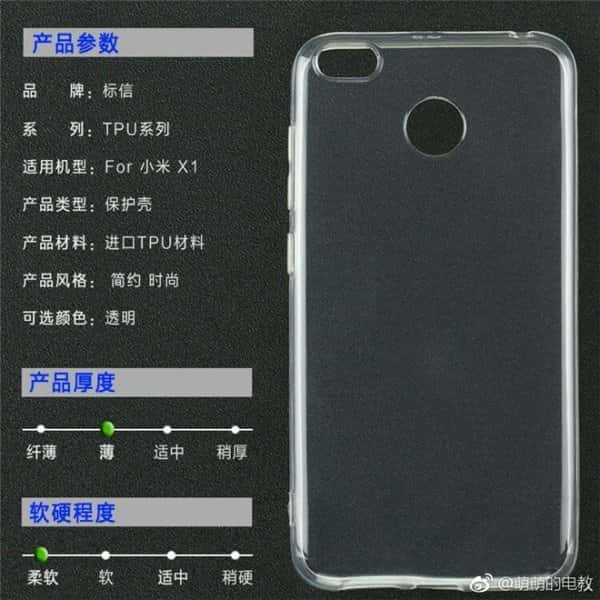 The post Xiaomi X1 Leaks, Redmi Pro 2 Rumored To Have Been Scrapped appeared first on AndroidHeadlines.com |.