So, what can we expect in terms of specs when it comes to the Xperia XZ3? Well, according to the provided spec sheet, the Xperia XZ3 will sport a 5.7-inch fullHD+ (2160 x 1080) display, 6GB of RAM and either 64GB or 128GB of expandable storage. A 3,240mAh battery will be included in the package as well, and it will probably be non-removable. Qualcomm’s Snapdragon 845 64-bit octa-core processor will fuel the device, while you will find 19-megapixel (f/1.8 aperture) and 12-megapixel (f/1.6 aperture) cameras on the back of the device, while a single 13-megapixel (f/2.0 aperture) camera will be included on the phone’s front side. Qualcomm’s Quick Charge 3.0 fast charging will also be supported by the Xperia XZ3, while the device will include two SIM card slots (2x nano SIM), though that may be market-dependent.

The phone will support 4G LTE connectivity, while it will measure 153 x 72 x 10.1mm, and it will weigh 183 grams. The Xperia XZ3 will also be IP68-certified for water and dust resistance, while a Type-C USB 3.1 port will be included on the bottom of the phone. The Xperia XZ3 will be made out of metal and glass, almost certainly, and it will probably resemble the Xperia XZ2 in terms of the design, as more significant changes are expected next year with the Xperia XZ4. 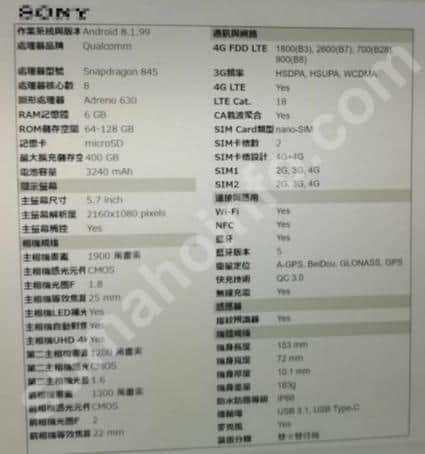