Years ago, fifteen-year-old Becca was abducted by a monster. Although she managed to escape, her tormentor was never caught. He wasn’t finished with Becca. He’s been searching for her…WEB OF SECRETS by Susan Sleeman

Web of Secrets (Agents Under Fire) 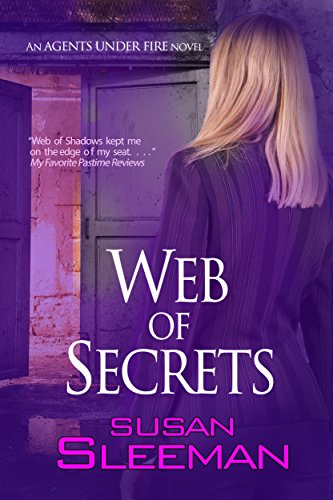 Years ago, a fifteen-year-old girl was abducted by a monster. Although she managed to escape, her tormenter was never caught. So the girl was given a new home, a new name . . . and the determination to save other foster kids from suffering similar horrors.

FBI Agent Becca Lange is in the middle of a credit card fraud investigation when she’s faced with her worst nightmare: a serial killer, van Gogh–given the name because he removed his victims’ ears–has resurfaced. Back in the nineties, van Gogh tortured, then killed several young foster girls. Becca was almost one of them.

Over the years, Becca’s been keeping her own investigation going. So when the police come to her for help, she’s more than ready to do what it takes to put van Gogh behind bars–even if it means working with Connor Warren, the easy-going cop whose attentions she’s been avoiding. Connor is too charming, too good-looking, too . . . tempting. He makes Becca want things she can never have. And might never have . . .

Because van Gogh isn’t finished with Becca yet. He’s been searching for her all these years. And now that he’s found her, he’s got a plan to keep her . . . forever.

“Web of Shadows is another winner from Sleeman. Highly recommended!”–Edits and Reviews by Leslie

Enjoy Susan Sleeman’s Books? Tell us Why and Win a Free Book!
Authors and Publishers: How to Sponsor Kindle Nation Daily

The post Years ago, fifteen-year-old Becca was abducted by a monster. Although she managed to escape, her tormentor was never caught.
He wasn’t finished with Becca. He’s been searching for her…
WEB OF SECRETS by Susan Sleeman appeared first on Kindle Fire on Kindle Nation Daily.