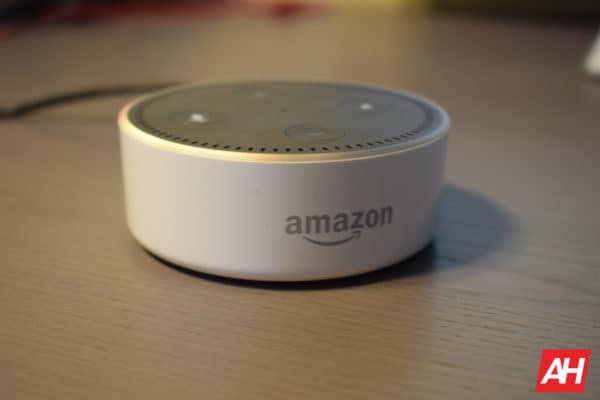 You can now "drop in" to instantly connect all of your Alexa-enabled devices into one giant, intercom-like conversation. Namely, the latest update to Amazon's AI assistant extends the scope of the Drop In feature originally introduced in late 2018. The said functionality essentially acted as a voice-activated intercom relay, for better or worse. As of recently, that solution is also available on a larger scale, i.e. in setups involving more than two Alexa-enabled devices.

Activating the new feature is as simple as commanding "Alexa, drop in on all of my devices." Doing so will momentarily initialize a Drop In group call which… is exactly what it sounds like. Amazon envisioned this feature as a way to keep modern families connected, though your mileage may vary. Following that same train of thought, the Seattle-based tech giant also improved Alexa remainders in recent days. More specifically, you can now set a global reminder spanning all of your Alexa-ready gadgets. The new option is disabled by default but can be activated with just a few taps from the Alexa Android app. More specifically, its "Announce On All Devices" toggle in the "Reminders" submenu.

Plenty more novelties on Alexa's feature list in May

Drop In is far from the only May 2020 addition to Alexa's feature list. During the same period, Amazon enhanced its AI companion with functionalities such as Daily Music Pick and Photo Reactions. As those names might have you imagine, Amazon's eager to ennoble Alexa's multimedia skillset. If that sounds strangely familiar, that's because you've been following Google Photos' roadmap for many years now.

After all, personalized content sharing is among the most reliable ways of boosting user engagement; and that goes for all manners of technology. It's hence unsurprising that Amazon isn't trying to reinvent the wheel in its efforts to continue driving the Alexa ecosystem's growth.

Finally, last month also saw Alexa expand to the Volkswagen Golf 8 series in select European markets. The move signals another one of Amazon's major AI pushes on the Old Continent.

In related news, Amazon's Alexa ecosystem recently received a major boost from Samsung and Sonos. More specifically, a number of Samsung's 2020 soundbars ship with Alexa built-in, as does the newly unveiled Sonos Arc. Which is not insignificant seeing how these are the industry leader's flagship offerings, priced at $700 and above. As the voice assistant market is continues to mature, these kinds of partnerships will become increasingly more important for the Alexa platform.

The post You Can Now 'Drop In' To Connect All Of Your Alexa Devices appeared first on Android Headlines.