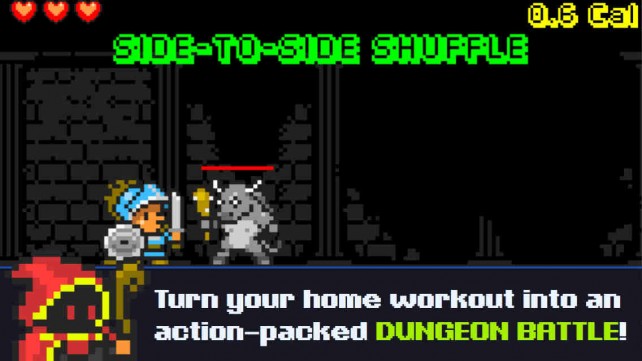 Six to Start, the startup behind the popular story-driven and gamified fitness apps Zombies, Run! and The Walk, is out with a new app called Dungeon Runner: Fitness Quest.

Dungeon Runner is a clever app that challenges you to play a dungeon crawling game by performing a series of real-world fitness exercises.

Dungeon Runner uses the same motion-tracking technology found in Six to Starts Superhero Workout. It monitors the front camera of your iOS device, situated about six feet in front of you (and preferably linked to an Apple TV), to automatically track your reps and calories and translate them into dungeon crawling actions and progressions:

Fight enemies with your punches, open secret passageways with your squats, avoid traps with your ski-jumps – and with five levels of dungeoneering action incorporating a variety of motion-tracked exercises, getting fit has never been such an adventure!

Dungeon Runner is the first of four new fitness games that have been set to be released by Six to Start over the holiday season as part of an event the developer has dubbed the Winter of Workouts.

For more new iOS apps of note, see also: Know how the weather affects your plans thanks to Weather or Not, Duolingo Test Center lets you certify your English proficiency right on your iOS device, and Stringer is an app that does shuffled music right.